Darkness lies in the East. As the army of Rohan musters to join the forces of Gondor, Aragorn forges ahead through the Paths of the Dead. Follow his path to seek justice and stability for the Realms of Men. As the leaders in Western Gondor answer the call of Gondor and head east, a dark force takes advantage of their absence. Adventure through 5 new levels of Epic Story and beautiful landscapes as you put your legend to the test!

Adventure into the Realms of Men 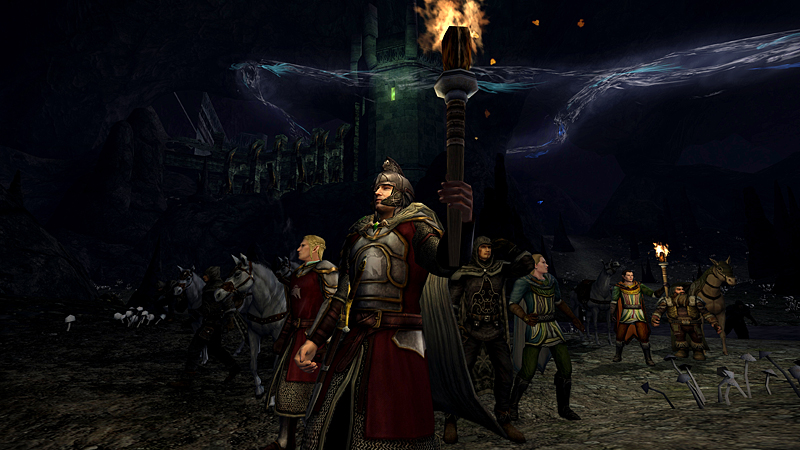 Mountain towns hold strong after the Army of the Dead has marched through the Vale. Threats from the mountains and from the valley remain. Is there something at work here? Or is this merely the wilds acting amiss? These people need your help.

Farming villages lay quiet in the deep valleys on your path to Dol Amroth. Working their land has made them blind to the dangers that have seized their shores. Corsairs have made their way north and now, more than ever, pose a real threat to the people in this region. Can you help them stem the tide?

The Ocean lies near. The abandoned Elven village of Edhellond awaits your gaze and Dol Amroth, the stronghold in this area, awaits your sword. The beaches stir as ships dock, bringing more Corsairs ashore. The air in Dol Amroth, however, is calm. Few know what is truly upon them.

Paths of the Dead

Not all who dwell beyond the Dead Door honored their oath. Aragorn took those who kept their word. The ones who remain, do they dare block your path?

Update 14: Paths of the Dead can be unlocked in the store with the offer Quest Pack: West Gondor, which is free to VIPs. Not VIP? Upgrade your account today.

New slotted equipment can be found throughout Middle-earth! Upgrade these armor pieces with Essences that hold great power. Find Essences, or craft them using elements you find in your travels!

New in the LOTRO Store

Learn more about the new store offers by clicking here.